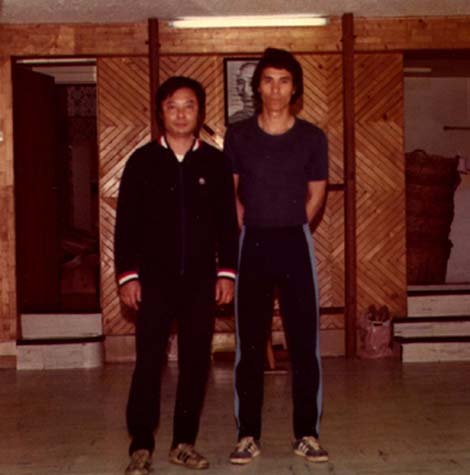 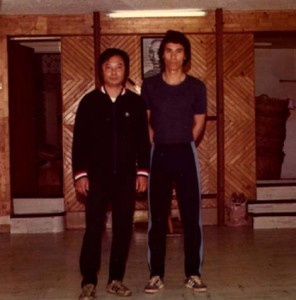 After the untimely death of the Great Master Wong Shun Leung, an enormous hole has been left, as the guidence of the fatherly figure is no longer there. There was an air of sadness that affected myself as I walked in to the Ving Tsun ameteur atheletic association headquarters located in the district known as Prince Edward in Hong Kong recently. One of the many who is attempting to fill this void is one of Sifu Wong Shun Leung’s more senior student by the name of Yuen Yim Keung.

Yuen Yim Keung was one of Wong Sifu’s more gifted fighters, he learnt the hard and long way, so much so that he spent more than eight years learning the Baat Jaam Do (Ving Tsun’s famous Knife form). This was to lay a strong foundation in his own mind.
He is a very articulate teacher, giving his utmost attention to his students, in the form of advice and correcting technique. Here is an insight into one man’s perspective of how Ving Tsun should be performed

John Smith How did you get involved with Ving Tsun?

Yuen Yim Keung Initially, I was a second-dan black belt in Goju Kai.
At night school, my English teacher, who knew I had a passion for Martial Arts,
introduced me to a friend of a friend who was a senior student of Leung Sheung
(who incidentally was Yip Man’s first Hong Kong student). This gentleman
noted that my legwork was good but my hand techniques needed
considerable attention. At first, I wanted to learn Ving Tsun from him,
but he said it would be better for me to be taught by a much better
teacher/fighter called Wong Shun Leung. At this time, Wong Shun
Leung would not take any person who had been practicing another
Martial Art before, but after intense negotiation Wong Sifu relented and I
became his student.

John Smith How many years ago was this, and who were your Sihing (seniors)?

Yuen Yim Keung I commenced training in 1970. Lam Man Hog (Gary Lam)
who is now teaching in the United States of America and Cheuk Hing Chuen, who was the most outstanding student according to Master Wong Shun Leung.
Cheuk Hing Chuen has actually become a Buddhist monk and does not teach any
more due to his religious beliefs.

John Smith What was training like in those early days?

Yuen Yim Keung The teaching was very slow, but it was taken much more
seriously than nowadays. Siu Nim Tau (young idea form), which is the first form of Ving Tsun to learn, took about two (2) months to complete. The basics were really drilled in initially. Wong Shun Leung used to give more attention to the students who used to go out and fight. They therefore took their fighting more seriously and therefore they were taught more.

John Smith It has long been known that Wong Sifu was an excellent fighter
and used to relish the chance of proving his skills in the Bei Mo (challenge fights), where he was never beaten. But as I understand he used to encourage his students to do the same thing. What type of preparations where taken before such challenge fights?

John Smith What were the rules of these contests?

Yuen Yim Keung There where three (3) two (2) minute rounds with a one
(1) minute rest in between. The ring was five (5) metres in diameter, which was
drawn in chalk, and as a result if the opponent went out of the ring more than
three (3) times he would be announced as the loser. There were also no attacks
to the eyes, throat or groin, but everything else could be applied. Also if there
was excessive blood loss, then the injured fighter would be announced as the
loser.

John Smith How many of these contests did you get involved with?

Yuen Yim Keung More than I can remember. Actually, Wong Shun Leung
ended up putting an end to these pre-arranged matches as his students were
defeating not only other Kung Fu styles but also other students of Ving Tsun
outside of the Wong Shun Leung family.

John Smith It has also been noted that you were not only a supreme
challenge fighter but also you had much success in the kick boxing arena.

Yuen Yim Keung Actually, the only ever defeat I ever encountered was in
Japan, where there was an invitation from Japan of two (2) fighters from Thailand, three (3) from the United States of America and two (2) from Hong Kong. The fighters from Hong Kong were Cheuk Hing Cheun and myself. All of these fighters were the best that their country could supply at the time. My defeat
occurred in the last round where I was actually ahead on points and my opponent suddenly broke my arm. This was my last fight.

John Smith What do you see as the major advantages of Wong Shun Leung’s
Ving Tsun?

Yuen Yim Keung Obviously, I am biased towards my Sifu (teacher), but he was very logical and systematic in his approach and he only ever taught the true
applications of fighting. The reason why Ving Tsun became so famous in Hong Kong was because of Wong Shun Leung. He had over sixty (60) pre-arranged challenge fights and was never defeated.

John Smith What do you consider to be the most important fundamentals of Ving Tsun?

Yuen Yim Keung Be systematic and practice all the forms thoroughly and really understand what you are actually doing when applying these thoughts to real-life fighting. This I inherited from my Sifu, Wong Shun Leung.

John Smith What are your ideas on Siu Nim Tau (the first form of Ving Tsun)?

Yuen Yim Keung It is the most important form of Ving Tsun and if it is not really understood then you will never get to perfection. A lot of people think Biu Ji is the most important, but actually it is not, it is only really used in case of an emergency, where things have not gone to plan and some form of alternate action needs to be taken. If Biu Ji was so important for these people’s thinking, then it should have been taught first.

John Smith How does the second form, Cham Kiu (the bridge seeking form) then differ from the first?

Yuen Yim Keung In Siu Nim Tau it is like learning the ABCs. Here we are
introducing basic arm movements, concepts and theories. Cham Kiu is putting these basic movements into a complete action, especially when movement is involved. If Siu Nim Tau is only practised even for more than ten (10) years you will never become a real fighter. It is only with the addition of Cham Kiu that it enhances all aspects of movement together with Chi Sau (sticking hands) and Laap Sau (grabbing hands).

John Smith What is the importance of Chi Sau?

Yuen Yim Keung It is to train your reflex action. If you have to use hand-eye
coordination it will be much slower. Whenever there is a clash of hands Chi Sau will automatically take over. Chi Sau promotes a non-conscious thought action where the arms feel for weaknesses in the opponent’s attack and when there is an opening our hands will immediately thrust forward. Chi Sau is the corner stone of Ving Tsun, this is what makes Ving Tsun different from the other styles.