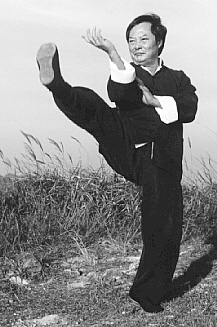 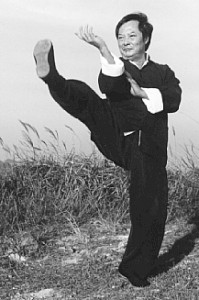 Master Wong Shun Leung, can you comment on some of the fights you won?
When we won in a fight, we weren’t always happy just to win. We tried to figure out how to win in a better and more economical way. The best is always if only a single action is required. Try not to use two actions. Like when kicking, Wing Chun doesn’t like to lift the knee first and then kick because this is a two step action. Also the line of force is wrong because your kick will not have ground support. Instead, your kick will transmit back to your body to off-balance you. This is why Yip Man’s kick in the second set looks a bit funny at first. We want to travel in a straight line from the ground to the target, not lift the knee first.

Can you comment on boxing?
In boxing, the style has changed over the years from crouching to being more and more vertical. Also people used to jump around, but the modern boxer like Tyson just moves in flat footed to demolish his opponent in a scientific way. In Wing Chun a person does not bob as in boxing. When two beginners fight it doesn’t matter how they fight, but against professionals it makes a difference. Even a smaller [person] is better off to keep the body vertical and step back, then to bob and weave. This is because the hand can move faster than the body. Boxing is still like a game because there are rules for how you can hit and how you can’t hit. If you attack someone and they bend their head, then in Wing Chun you can still hit them with your hand even without pulling your hand back.

What is the idea of the Chain punches in Wing Chun?
In Wing Chun if you throw two fast punches to someone’s head they’ll be knocked out. The first punch causes the brain to go to one side of the skull. If a quick second hit comes, the person is knocked out. If you withdraw the hand to give the second punch, then the brain can recover (will have more time to recover), but if you don’t give this time then a knockout results.

How can you deal with a good kicker?
Against a strong kicker there are two ways to fight. If you are experienced, just go into their center and hit. But if you aren’t, then back up. Each time the opponent misses, he will lose one degree of confidence. After a while you have more chances.

What is the idea of the wooden dummy?
The idea of the dummy is that we do make mistakes. When we do, how can we recover from those mistakes in the most economical way? How can we minimize the error we have made?

Of what use is the Chum Kiu Jip sau movement?
One use is as follows: if someone grabs your shirt you can use the first set Jut sau combined with an uplifting palm to injure the arm of the opponent. This is more economical than the Judo method of grabbing the hand and twisting it.

What do some other Wing Chun Sifus you have seen do wrong?
Some have too much movement when they defend.

Was Yip Man good?
Wong Shun Leung said if he wasn’t good then he would never have joined up. He said Yip Man was very good.

Did Yip Man teach all of the principles or did you figure them out?
Yip Man taught many of the principles but we also figured some out from experience and long discussions. Wing Chun teaches you how to think. People have found that Wing Chun principles can also be applied to other areas of one’s life.

Can you comment on the effect of a punch?
Wong Shun Leung said that when you punch the head the brain hits the side of the skull. If the brain is against the side of the skull and a second hit follows, then damage and a knockout results because there is no cushioning possible. This is why Wing Chun has its rapid fire punches instead of the pull back approach.

What kind of art is Wing Chun?
Wong shun Leung said that Wing Chun is an attacking art. The idea is to hit straight right away. Don’t have any roundabout motions.

What is a tip for our sticking hands and for real Wing Chun?
Don’t play with hands. Try to hit the opponent each time.

We have heard that you taught Bruce Lee. Can you comment on this?
Bruce Lee was good. All of the credit cannot go to the teacher.

How does Wing Chun approach knife fighting?
Wong Shun Leung said he has faced multiple opponents armed with knives. However on the subject of knife fighting training, Wong Shun Leung said Wing Chun does not send you out to get killed. Even if you can defend against eighty percent of the knife attacks, the remainder will get you killed. A lot of defenses are not realistic because the knife can twist around. Sometimes a kick to the hand is used.

Can you comment on some of the Wing Chun shapes?
Master Tsui Sheung Tin said the shapes are not as important as the structure. This is more important than the sticking feeling with the Fook sau exactly level. Both masters felt that the flat Fook sau is very bad and is used only because people can’t do the other Fook sau properly. The flat one is bad because you can’t punch as fast from this position.

Is the Fak sau or neck chop used a lot?
Master Wong Shun Leung never teaches to hit the neck because once his finger tips caught someone’s neck and that person almost died. He instantly went pale.

How does the Tan sau elevate?
The Tan sau structure is elevated as one unit in order to handle force. The arm never bends from the elbow.

How can you respond to a grab?
If you hold two arms out in front of you and someone grabs them, then you can use the third set elbow movement to escape. Bring the hand right in to touch the body. If the hand is held in a fist, it doesn’t work. Then press down with the elbow.

Can you explain a bit about what Wing Chun is?
On the subject of what is Wing Chun, Master Wong Shun Leung said that if you make a mistake then you learn how to minimize that mistake. You learn to recover quickly. So in essence he was saying that Wing Chun is really about being economical in your actions and use of energy.

How much did you train when you learned Wing Chun?
Wong Shun Leung said they trained six days a week, six hours a day. Bruce Lee learned for about one and a half years and then went to the USA.

What is the literal meaning of “Wing Chun”?
Wing Chun means “Springtime Song”.

Why are there differences in Wing Chun terminology?
Yip Man did not pass on all these things. Some terminology like Ding sau is made up because they really didn’t have a term for some of these things.

Do the Hong Kong Police still use Wing Chun?
The Hong Kong police do not really want to use Wing Chun now that much because it is too aggressive an art. They are supposed to just help and protect people, not attack them.

Have you taught any women who are good?
Wong Shun Leung has not really taught too many woman except the all Asian champion who was a very aggressive woman. She is now married and out of it.

Could we see some sticking hands between the two masters?
Wong Shun Leung said that you would not see too much because it is like when two teams who are good play together, they are so evenly matched that it looks boring. The same is true when you watch a match between two equal judo players.

Can you comment on the straight line concept?
Wong Shun Leung said when you kick a football on the side it will wobble and won’t fly straight, but when you kick the football dead center the football flies straight and the most force is transmitted to the ball. Therefore we hit people in the center as well.

Is the triangle theory of any use?
Wong Shun Leung said the theory of triangles is very important in Wing Chun, because this is a very stable structure. It is used not only in the theory of our stance (like a pyramid or the Eiffel Tower) but also in the angles of our arms.